Skip to content
Orlando is one of the most popular tourist destinations in the world with its theme parks and perfect weather.
But if you’ve never visited before, the sheer amount of things to see and do can be a little overwhelming, so we’ve put together this quick guide to everything you’ll need to know when visiting Orlando for the first time.

The theme parks are the major draw to Orlando, with four Disney parks, two at Universal Studios and others such as SeaWorld close by as well.
All of the parks are located fairly close to each other, in an area a few miles (10-20 minutes) to the southwest of the city, with Disney found in Lake Buena Vista, and the Universal and SeaWorld parks around International Drive. 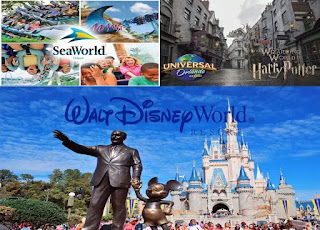 We spoke to flight booking experts, Globehunters, who said: “Be sure to book tickets to theme parks well in advance, as they’re far more expensive if you turn up on the day, and you can usually bag some good deals in advance, with many airlines offering package deals that include your flight, hotel and park tickets.”

If the idea of walking around a theme park in the heat is too much to bear, consider heading to one of the water parks instead.
There are two at Disney (Typhoon Lagoon and Blizzard Beach), as well as Aquatica at SeaWorld or the new Volcano Bay at Universal.

If you want to spend some time at the beach during your stay, you’ll want to head out to either Cocoa Beach or Daytona Beach, both of which are about an hour and a half to the east, via SR 50 to US1 to Cocoa or Interstate 4 East to Daytona.

If you want to head out to the beaches on the west coast, such as St. Pete, Clearwater, and Tarpon Springs, this will take about two hours via Interstate 4.

You essentially have two options when it comes to choosing where to stay, either a rented holiday villa or a standard hotel.
A holiday rental gives you that home away from home feeling, and is ideal if you’ve travelling with a large group.
If you opt for a hotel, we recommend staying in the International Drive (I-Drive) area, as this is where the majority of the tourist activity is located.
If you’re not planning on driving while you’re in Orlando, it could be a good idea to stay on site at one of the many Disney or Universal hotels, and just make use of the free shuttle buses.

If you’re going to be heading further afield than just the main theme parks, then you’ll probably want to hire a car during your stay, and there’s a great range of rental companies at Orlando International Airport.
However, as we previously mentioned there are plenty of shuttle buses to the parks that you can make use of, as well as the I-Ride Trolley.

As for arriving, Orlando actually has two airports, Orlando International Airport (MCO) and Orlando Sanford (SFB), both of which are arrival points for UK flights, although Sanford is about 30 miles away, in the city of Sanford.
We do not share your personal details with anyone.
Scroll to Top